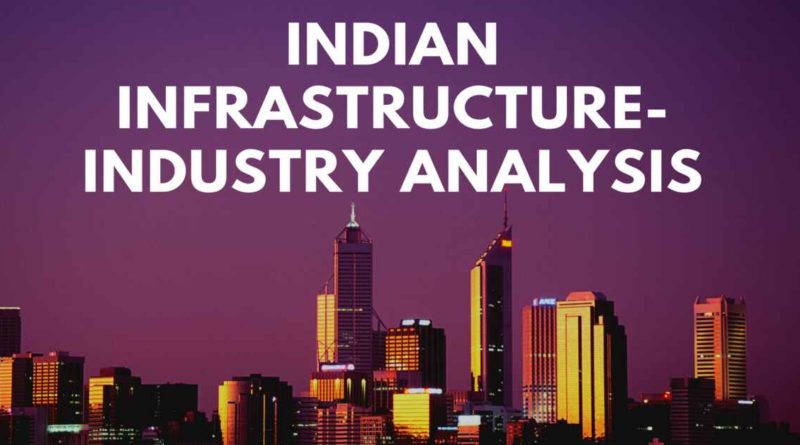 It is well-accepted that investment in infrastructure is necessary for growth. Power shortages lead to dependence on expensive captive power, which in turn impels high costs and lack of competitiveness for the economy. Inadequate transport infrastructure leads to bottlenecks both in the supply of raw materials as well as movement of finished goods to the marketplace.

The price that farmers get for their produce is depressed if there is no connectivity through good quality rural roads, which in turn keeps rural incomes depressed negating the fruits of high overall growth performance. For all these reasons, provision of adequate infrastructure is essential for growth and for making growth inclusive. India recently launched the National Infrastructure Pipeline for the period FY 2020-2025.

Investment in Infrastructure is necessary for growth. To achieve the GDP of $5 trillion by 2024-25, India needs to spend about $1.4 trillion (` 100 lakh crore) over these years on infrastructure.

To draw up the National Infrastructure Pipeline (NIP) for each of the years from FY 2019-20 to FY 2024-25, an inter-ministerial Task Force was set up in September 2019 under the chairmanship of Secretary (DEA), Ministry of Finance.

NIP is expected to enable well-prepared infrastructure projects which will create jobs, improve ease of living, and provide equitable access to infrastructure for all, thereby making growth more inclusive.

The Finance Minister released the Report of the Task Force on National Infrastructure Pipeline (abridged version) on 31.12.2019. The NIP has projected total infrastructure investment of ` 102 lakh crore during the period FY 2020 to 2025 in India. Energy (24 per cent), Roads (19 per cent), Urban (16 per cent), and Railways (13 per cent) amount to over 70 per cent of the projected capital expenditure during the said period.

The sector wise break-up of NIP projects is as follows:

The NIP captures the infrastructure vision of the country for the period FY20-25. This is the first ever exercise undertaken in the country. However, it is recognized that financing of the National Infrastructure Pipeline would be a challenge.

Total investment in the Roads and Highway sector has gone up more than three times in five year period of 2014-15 to 2018-19.

India has second largest road networks in the world, spanning a total of 5.5 million kilometres (kms).

With the Government permitting 100 per cent foreign direct investment (FDI) in the road sector, several foreign companies have formed partnerships with Indian players to capitalise on the sector’s growth.

Indian Railways (IR) with over 68,000 route kms is the third largest network in the world under single management.

Indian Railways cover over 8,700 stations and carry around 230 lakh passengers daily with clientele of varied socio-economic backgrounds. Regular intensive campaigns/drives have been organized since then by the Indian Railways with the sole objective to achieve significant and sustainable improvements in cleanliness standards.

India is the third largest domestic market for civil aviation in the world. India has 136 commercially-managed airports by Airports Authority of India (AAI) and 6 under Public- Private Partnerships (PPP) for Operation, Maintenance and Development of airports.

On airport connectivity, India stood first along with 7 others (USA, China, Japan, UK, etc.) in the Global Competitiveness Report 2019 of World Economic Forum. To ease the strain on existing airport capacities, 100 more airports are to be made operational by FY 2023-24.

To continue with the high growth trajectory, the Government has been providing a congenial environment so that the Indian carriers double their fleet from about 680 aircraft (number of aircrafts endorsed on Scheduled Airlines) at the close of November 2019 to over 1,200 by FY 2023-24.

Shipping is essential to both commodity and services trade of any country. Around 95 per cent of India’s trade by volume and 68 per cent in terms of value is transported by sea.

The performance of the global shipping industry is generally mirrored by Indian shipping. India’s shipping tonnage was only 1.92 lakh Gross Tonnage (GT) on the eve of independence. It increased gradually thereafter, but was practically stagnant at around 70 lakh GT till the beginning of 2004-05. However, the tonnage tax regime introduced by the Government of India in that year boosted the growth of the Indian fleet as well as its tonnage.

As on 30th September, 2019, India had a fleet strength of 1,419 ships. Despite one of the largest merchant shipping fleet among developing countries, India’s share in total world dead weight tonnage (DWT) is only 0.9 per cent as on January 1, 2019 according to Institute of Shipping Economics and Logistics.

The existing Indian fleet is also aging, with the average age increasing from 15 years in 1999 to 19.71 years as on October 1, 2019 (42.06 per cent of the fleet is 21 years and above and 12.49 per cent is in the 16 to 20 year age group). The Major Ports in the country have an installed capacity of 1,514.09 MTPA as in March, 2019 and handled traffic of 699.09 MT during 2018-19. While increasing the capacity of major ports, Ministry of Shipping has been striving to improve the operational efficiencies through mechanization, digitization and process simplification.

The number of mobile internet subscribers was 6,436 lakh at the end of June 2019 while the number of wireline internet subscribers was 217 lakh. Total broadband connections increased by about ten times, from 610 lakh in 2014 to 5,946 lakh in June 2019. This has accelerated the growth in internet traffic, with data usage touching the highest ever level of 462 lakh terabytes in the year 2018. India is now the global leader in monthly data consumption, with average consumption per subscriber per month increasing 157 times from 62 MB in 2014 to 9.8 GB in June 2019. The cost of data has also reduced substantially, enabling affordable internet access for millions of citizens.

India is the third largest energy consumer in the world after USA and China. With a share of 5.8 per cent of the world’s primary energy consumption, India’s energy requirement is fulfilled primarily by Coal, Crude Oil, Renewable Energy and Natural Gas.

However, India’s oil production is one of the lowest among the major economies of the world and has been declining over a period of time. During 2019-20, the domestic crude oil production is estimated to be 32.6 MMT (Economic Survey calculations).

Power sector in India has witnessed a paradigm shift over the years due to the constant efforts of Government to foster investment in the sector. As a result, lndia has improved its ranking to 76th position in the Energy Transition Index published by the World Economic Forum (WEF). Fostering Effective Energy Transition, 2019 Report of WEF states, “India, Indonesia and Bangladesh have made fast progress towards universal electrification due to strong political commitment, a stable policy regime, use of grid expansion, and decentralized generation sources, and a supportive environment for investment in infrastructure.”

Along with universal electrification, commendable progress has been made in generation and transmission of electricity. The installed capacity has increased from 3,56,100 MW in March 2019 to 3,64,960 MW as on 31.10.2019.

There has been a notable turnaround in mineral production because of policy reforms. The production of major minerals during the year 2018-19 has recorded a growth of 25 per cent when compared to last year in terms of value.

India is one of the fastest growing countries in the world with rapid urbanization. There were about 37.7 crore people residing in the urban habitats of India (Census 2011), comprising about 31 per cent of the total population which is expected to reach 60.6 crore by 2030 (2015:UN).

The Pradhan Mantri Awas Yojana-Urban (PMAY-U) was launched in June, 2015 to provide pucca house with basic amenities to all eligible urban poor. The States/UTs were mandated to conduct demand survey to estimate the housing demand in their respective cities/towns. So far, a validated demand of 1.12 crore houses has been registered.

Urban habitats and cities are the epicentres of economic growth which has contributed significantly to the Indian economy. Over 60 per cent of India’s current GDP comes from the cities and towns.

The construction sector accounts for 8.2 per cent of GDP which includes housing and employs about 12 per cent of the workforce.

The scheme of PMAY (U) is rapidly moving towards achieving the vision for providing a pucca house to every household by 2022. Out of 1.03 crore houses approved, 60 lakhs have been grounded for construction, of which 32 lakh houses have been completed and delivered.

Infrastructure sector is a key driver for the Indian economy. In India the present Government is focusing to build a world class infrastructure. They giving push all the projects and projects are being completed on time.

In first 50 days of his second term, the Modi Government has set a target for 5 Trillion $ economy. And for achieving this they are going to spent Rs. 100 lakhs crores only on infrastructure.

Chennai-Bangalore Industrial Corridor, Delhi-Mumbai industrial corridor and Dholera are the mega projects that will take Indian infrastructure to a next level.

The Chennai-Bangalore Industrial Corridor Project is an upcoming mega infrastructure project of Government of India. The corridor plans to come up along Chennai, Sriperumbudur, Ponnapanthangal, Ranipet, Suburbans of Vellore, Chittoor, Bangarupalem, Palamaner, Bangarpet, Hoskote and Bangalore.

The Dholera Special Investment Region (DSIR) is proposed as a major new industrial hub to be located about 100 kilometres (km) south of Ahmedabad and 130 km from Gandhinagar within the Saurashtra peninsula.

If you want to see a bit detailed report, with more chart presentation then you can get this report from our shop section by contributing only Rs. 11.